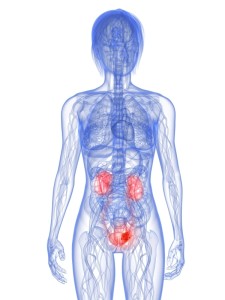 In January of 2012, I was handed a cruel and public test of my understanding of the Three Principles, (Mind, Thought and Consciousness). I planned to draw on my own life experiences as examples and impart how this Teaching allowed calmer insights and perspectives with which to move through everyday life. However, this “assignment” from the Universe soon became more unwieldy than anything I had ever imagined or bargained for.

That was 15 months ago. And I now find myself so fogged, disoriented and bloated with pain by a present situation that it is nearly impossible to focus on this blog to explain what’s taken place in the interim, and worse, what’s come to light most recently, that in its own way, outshines the – overshadows the – partial diagnosis pictured above. My partner was adamant that I not use this image with this blog so that her workmates wouldn’t know the location of the primary tumors. That was a clue for someone sharper than me.

Those pink outlines on the figure indicate cancer. In late summer of 2011 my partner was diagnosed with an enormous cancerous tumor on her bladder, and cancer spreading to neighboring organs and bones. No use going into the details but the aggressiveness of the cancers was insurmountable, undiagnosable and therefore untreatable. Her condition was summarized with the acronym CUP, or cancer of unknown primary.

Although the medical establishment in their infinite guesswork assured us they could “help” her, and she spent many, many hours with toxic substances dripping into her teeny veins, in the end their hit-and-miss cocktails apparently nurtured tumor growth. Further, the diagnosis of CUP is a kind of death sentence in itself, at least in the U.S., because it is not being researched or recognized, for one thing. We had to find out smidgens of information from fellow patients through two websites in Australia & the U.K., where CUP research and treatments are being heavily promoted now due to patient and doctor advocacy. But that aspect of the topic will be covered in another blog post. Globally, CUP is a very lonely and isolating cancer.

We didn’t know these things at the beginning. We were protected by Mother Nature’s numbness that deadens us when they get very bad news. We were protected by our understanding of the Three Principles and thus saved the usual emotional and mental torture which cancer victims and their loved ones suffer. We knew, for instance, that Not Knowing outcomes was okay. We did not obsess about labs and test results nor allow fear thoughts to reign. Until the very end, I thought she would live and it never dawned on me that she wouldn’t make it. I later learned that she longed to die and knew she would never make it.

For a long while after the diagnosis, our daily life patterns remained approximately the same, except that she worked from home. We still began at dawn each day, reading from Joseph Bailey’s Fearproof Your Life or other spiritual gems, and then filled our journals with timed writings, before getting out of bed. Little changes and constant interruptions began to eat up the time. For instance, she now worked at home several hours a day and took a supplement or a medication hourly. Even though she rested far more than usual, we still took our daily walks in lovely Hillsborough or San Mateo. Because constipation is a serious problem for cancer patients, I incorporated a daily, gentle yoga practice to keep things moving. My technique was a definite improvement over the tepid prune juice suggested by a useless oncology advice nurse.

In silent agreement, each day became more special and important. Although affection was never missing between us, we became even more gentle and loving more often during each day. Small gestures that brought her joy! For instance, I made french toast for breakfast sometimes, definitely not on our food plan, and served it up on old, hand-painted French balloon plates that she’d dug out of a kitchen at an estate sale. I loved having her home and did not have a clue that our time was running out. I thought she’d get well and we could begin a new life, far, far away from the university job which crushed her to the wall.

Serving cancer is a 24/7 job, and slowly, without our noticing it, our life became consumed with, and constantly interrupted by, her sudden need for medical attention. In addition to the hourly xylophone reminders to take meds, the number of unexpected, unplanned trips for lab tests, or to the chemo unit, or for radiation, or to get blood transfusions, for CAT scans, and MRIs, and finally, to the ER too many times in a row, tired us out and altered our lives forever. Her waking hours went from trying to work at home to doing endless paperwork for insurance and disability. More and more she fell asleep in mid-sentence.

We both allowed quiet love and inner wisdom to guide us through the day. For example, I, to whom more and more culinary duties slid, served up our normal organic meals along with suggested spices from the anti-cancer book. We’d eaten organically all our lives anyway and so these small additions to our diet really did not enhance our hope for her recovery from such an aggressive cancer, and her lab results were a constant reminder of this discrepancy.

We still shopped at CSM Farmers’ Market on Saturday – rather, she laid back on a chaise lounge I dragged up a grassy slope and placed under the trees for her, while I, already feeling the loneliness to come, stopped by our favorite farmers and flower vendor to collect our weekly sustenance. Back home, we pulled out all the gorgeous Depression glass, elegant glass, and art deco dishes, used only for special occasions, and made them every day fare. For a while, she was able to continue her Saturday ritual, arranging flowers in antique bottles & vases, placing them everywhere in the apartment, including the bathroom.

We, or at least I, didn’t know that she was going to die. I learned later that she gave up long before the second round of chemo ended. We didn’t know she was going to suffer because there was nothing known to alleviate the worst side effects of her disease. We didn’t know that the unconscious young girls wearing plastic “MD” tags did not actually care about her welfare. They did not intervene for her as they could and should have. Clearly the little girl assigned to her primary oncology care had far more interest in days off with her children or painting her toenails. She never inquired after her welfare when my partner was quickly dismissed after the dripping toxins proved useless. The Kaiser Oncology Unit in Redwood City, CA, provides the worst care available within the KP system. Their ‘chief’ has a pronounced, avoidance-like disorder and her “ducklings” follow suit when it comes to simple human contact.

In short, we had only ourselves and our faith, and our love, and daily readings and writings, and for a while she worked at home. We had a busy life. Attention to her care overrode any plans or hope we had of short car rides to the ocean or to Golden Gate Park, and because of the extreme discomfort accompanying the voracious growth of cancer in her organs and bones it became nearly unbearable for her to ride in the car. Playing Scrabble and reading out loud quickly vanished as she nodded off more and more, often in mid-sentence. And perhaps most obvious, the culmination of our life works and studies, which was to be expressed through this website, evaporated.

My partner, for the longest time, did not want anyone to know the locations of her tumors. She did not want me to include the above image or to discuss what we were experiencing. Later it all made sense why she was so adamant about hiding the locations of her tumors. Because we were also chronically fatigued from the medical appointments and disruptions that her care required, I unfortunately did not press the issue of our work together, which I now fully regret.

My partner died at the end of last summer, 2012, before carving her last wicked pumpkin faces, or hearing the cranberries pop in the pan as she stirred her Thanksgiving sauce, or hanging her beloved Christmas lights and trinkets, lovingly collected over decades.

It has taken these many months to dissolve the household, sell or donate our belongings, move to another residence, and to recover from this loss of someone whom I loved for 27 years. Going through her belongings, I found thousands of pieces of paper bearing stories, autobiographical and fantasy, memories, poems, journals, hundreds of sketches, cynical, pornographic, brilliant and original, and hundreds of photographs journaling our life together, and then photographs that I was never meant to see – I learned of a person whom I had never met! I learned of another life she lived right alongside me which I never knew existed.

The content of most of these findings was so disturbing that I did not know who to speak with about them. I became disoriented and ashamed. Mostly I shoveled them into our large, old canvas LL Bean grocery bag and dashed repeatedly down to Office Max and paid to have them shredded. I hit a new kind of low – shell shocked if you will – which blindsided me.

I had no idea what to call my discoveries of her life and thoughts and drawings, stories, poems, journals, including every rental application and rent receipt going back more than 27 years. Certainly there was no living human being I could discuss this with because I didn’t even know what to call it or how to verbalize what I’d found. Early 2013 were the darkest weeks of my 68 years, filled with nausea and dread.

I am only now dusting off these pages and opening up to reveal the agony and unbearable burdens that unfolded and still unfold for not only the patients and families of cancer but another, deadlier disease which is rarely diagnosed and never mentioned. But more on that in another post…